Concussions have long been a known risk in professional contact sports like football and soccer. But in 2006—after 13-year-old Zackery Lystedt suffered a debilitating brain injury during a school football game—the spotlight shifted to the issue of concussions in younger athletes. It was determined that had Zackery not returned to play following an initial blow to his head, he would have fully recovered. Instead, the teen had to undergo life-saving emergency surgery and was left unable to walk and speak for months after his accident.

The Rise of Return-to-Play Laws

For parents, schools, and youth sports leagues across Zackery’s home state of Washington, his story underscored the serious dangers of returning to play too soon. In May 2009, Washington became the first state in the nation to implement robust youth sports concussion safety laws. Among other provisions, the “Zackery Lystedt Laws” require that:

Between 2009 and 2014, legislatures in all 50 states and the District of Columbia followed suit and enacted similar laws, referred to collectively as “return-to-play” laws. Overall, return-to-play legislation has had a questionable impact. A recent University of Michigan study found a 92 percent increase in 12-18 year olds seeking medical treatment for head injuries in states with concussion laws. However, the laws have weaknesses that make enforcement a challenge. For example, few laws apply to recreational leagues (such as Pop Warner). And nearly all of them lack penalties for coaches or schools that fail to comply.

These gaps in the laws mean that parents and coaches must be proactive in creating a culture of safety in youth sports. Athletes themselves can take part, too—if we empower and encourage them to take an active role.

Youth sports are more competitive today than ever before. Championship-hungry coaches and parents with visions of college scholarships may inadvertently place kids under intense pressure. In turn, players may be hesitant to let down their team or parents by complaining of an injury that might take them out of the game.

For these reasons, it’s essential to include young athletes in comprehensive concussion education. Players should be taught early on to:

Wear properly fitted equipment: Protective gear such as mouth guards and helmets are helpful in preventing bodily injuries. It’s important that parents and children gain an awareness of Chronic Traumatic Encephalopathy and understand that helmets do not prevent concussions or the development of CTE.

Respect the rules of the game: Equipment alone cannot protect against concussions; student athletes must take other precautions. Kids and teens should be taught injury prevention techniques for their sport, such as blocking and tackling with their heads up and other ways to minimize head-to-head contact.

Report signs of a problem right away: Players should be warned, repeatedly, that an untreated concussion could lead to grave injury. Any athlete experiencing the following symptoms should notify a coach or parent immediately:

Awareness is just as important as prevention. Kids and adolescents who clearly understand the dangers of a concussion and CTE will likely be more confident about reporting symptoms without worrying about disappointing their teammates or coach.

Return-to-play laws are a step in the right direction for greater safety in youth sports, but lack adequate enforcement and may stand to benefit sports more than kids in some cases. With continuing education for parents and coaches, coupled with athlete self-advocacy, we have the power to reverse the trend of youth concussions and make our playing fields safer for all kids. 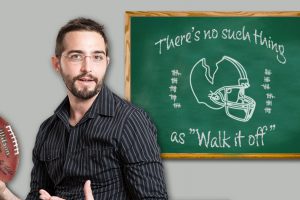 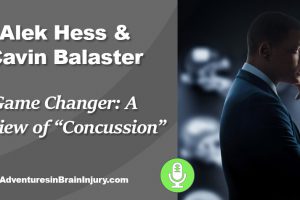 Podcast 7 – Game Changer: A Review of the Film “Concussion” 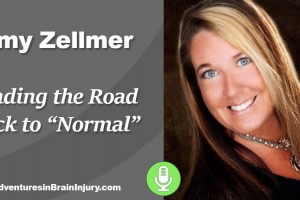