Ask Me Anything! – The Best From My Interview on Reddit.com

Following the launch of my Kickstarter campaign for my upcoming book “Lights, Coma, Action!” I began to receive requests to participate in what’s known as an “AMA” or “Ask Me Anything!” session on a website called Reddit.com. Essentially, Reddit functions as a social news and entertainment website–almost like a giant forum–where millions of registered users submit content in the form of links or text posts to various categories. Users can chose to vote each submission “up” or “down” to rank the post and determine its position on the site’s pages.

Reddit has very little limitations on category creation or content submission. There are literally thousands of different categories to choose from, all privately owned by a moderator. In the “AMA” section (or subreddit) of the site, hundreds of different celebrities, politicians, and interesting individuals conduct these interview-style sessions every week. Individuals will often announce their intention to do an AMA over social media beforehand to both prepare questioners for the coming session and provide proof of their identity. Popular AMAs have included interviews with individuals such as Barack Obama, Bill Gates, countless actors, scientists, and so on! You can still see my AMA interview forever archived on Reddit here

Up until my AMA session, I had almost no knowledge of what Reddit was or how it worked. With the help of several friends, I got a quick crash course on the different sections of the site, the voting system, and posting etiquette (or Reddiquette). Days before my session, I made sure to promote my upcoming AMA and rallied a few friends to help me out. I finally settled on the title:

My name is Cavin. Two and a half years ago, I fell 20 feet from a water tower on an industrial Brooklyn rooftop. I hit the front of my head on the steel scaffolding on the way down, and hit the back of my head on the concrete rooftop. I was rushed to the hospital where I was comatose and put on life support. I was diagnosed with a Diffuse Axonal Injury. Approximately 90% of people with this injury never regain consciousness. Those who do wake up will often remain significantly impaired or in a vegetative state.

After twelve days in a coma… I woke up! The following months were spent learning how to walk, talk, and eat all over again. I mirrored my growth from infancy. I fought for my independence with doctors, my family, and my friends as I struggled to cope with the consequences of my brain injury, the betrayal of my oldest friend, and the loss of my life as I knew it.

I felt compelled to write about my story, and, because conventional medicine offered little in terms of treatment, I began to study my way to recovery. I also began to write about the most important and useful methods that I have used to recover in hopes to help other survivors and their friends and families.

I have since been studying physiology, biochemistry, human metabolism, pharmacology, and medical neuroscience on my own, and I plan to go on to study all of these subjects at an accredited medical university while also learning as much as I can about brain injury, human nutrition, and alternative therapies. Additionally, I’m currently writing a book that I hope will become a resource for brain injury survivors everywhere, as my blog has already become. This book will be the story of who I was (LIGHTS), how I sustained a serious brain injury (COMA), and my successful recovery (ACTION!). These are my adventures in brain injury: “Lights, Coma, Action!””

I followed up with a list of different videos and pictures from my recovery as well as links to my Kickstarter and several blog posts.

The Best From the Interview

Almost immediately, questions were coming in. There were a few in the first five minutes, then twenty, soon a hundred! I spent the better part of two days replying to hundreds of different questions and my AMA session received over 1300 “upvotes” and made it to the top 3 posts of the AMA section. Needless to say, it was a lot of fun and an absolute honor to be able to speak to so many individuals who were inspired by my story, were close to survivors, or were survivors themselves. Below are what I consider to be some of the very best of those questions, my replies included:

4ScienceandReason: After your accident, do you feel that people perceived or handled you differently as a person? I can’t imagine how difficult it must have been trying to re-learn to use your body. Did you feel self-conscious in public? Was anyone offensive?

Cavin: I was originally babied by people and would get mad and tell them that I want to be treated normal. I told my friends to not treat me differently or accommodate my difficulties because I wanted to live up to society rather than the other way around. I currently go to school and do not tell the class that I have a brain injury so that I do not get babied or treated like a “retard.” I do not tell people and, because I have overcome so much, most people do not seem to notice. I was pretty self conscious about my uncoordinated movements and wonky gate, but I walked around my neighborhood obsessively to regain some coordination.

ericpeffley: As a close friend of Cavin’s (I’m not using my real name on Reddit), I always treated him the exact same way I always have for years and years, even though personally it was a bit strange/difficult/odd at first. I think it took about 15 minutes of talking with him once he was out of the hospital and walking (very slowly at the time) that I realized he was 100% there, but just not perfectly physically coordinated or had his voice “dialed in” or practiced yet.

OTinTraining: Hey Cavin, I’m currently studying to be an occupational therapist and I was wondering what treatment, if any, you received from an OT during your recovery. 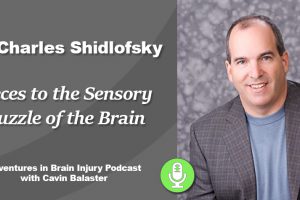 Podcast 20 – Pieces to the Sensory Puzzle of the Brain

Cavin and Michelle interview Dr. Charles Shidlofsky. A brilliant optometrist, he received his OD all the way back in 1988 and has been very active in neuro-optometry for most of his 29 years in practice.

Podcast 4 – Yoga, Speaking, and Catch Up! 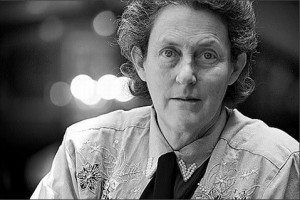 Temple Grandin: The World Needs All Kinds of Minds

Temple Grandin is an American doctor of animal science and professor in my home state at Colorado State University.[...]